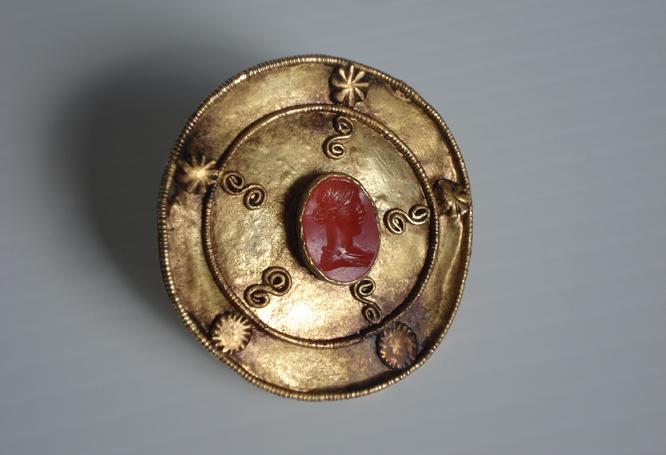 The gold disc with oval cameo, displayed in one of the showcases of the Segre Gold Interpretation Center, next to the Valleta de Valero necklace, is a reproduction of the original piece that can be seen in the permanent room of the Museum of Lleida Diocesano y Comarcal.

The disc was found by chance in the place known as the Racó de la Pampa, in Soses, but possibly it was part, together with the Valleta de Valero necklace, of the same concealment or funerary set.

The disc has 5.40 cm diameter and has a gold foil and thread. In the center is embedded an oval cameo made of glass or carnelian paste, which represents a female bust, probably from the Julius-Claudius period (27 BC - 68 AD), with the characteristic hairstyle of the era: the straight hair collected on both sides from the head behind the ears and, finally, picked up at the nape of the neck.

This type of disc or disc fibula had a purely ornamental function and it has to be related to the upper class and landowner of the time, who occupied this territory for a long period along the course of the Segre.