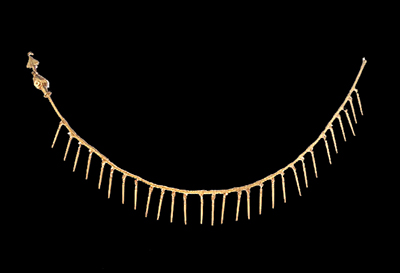 The Valleta de Valero necklace, exhibited in one of the showcases of the Gold Interpretation Center, is a reproduction of the original piece found in the Diocesan and Regional Lleida Museum.

The necklace was found by chance by a neighbor of Soses in a place known as Valleta de Valero, on the slope of a hill known by the same name located on the right of the Segre between the towns of Aitona and Soses.

Chronologically it is dated in the 5th century AD.

The choker, of a length of 32 cm, it is composed of a chain formed by eight gold threads braided in the shape of a spike, from which hang 29 rings with a fusiform pendant in each.

At one end of the necklace, the head of a lion is represented, to which a hook-shaped triangular plate corresponding to the mechanism of the closure is fitted.

This type of gold chokers were indicators of social status and a symbol of prestige, and this represents an important document for the knowledge of the settlement of the basin of the lower Segre in Late Antiquity.