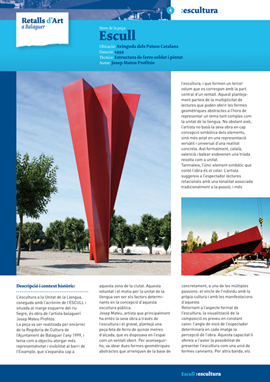 The sculpture to the Unit of the Language, known by the acronym of ESCULL [for its name in Catalan: Escultura a la Unitat de la Llengua] and located on the left bank of the River Segre, is the work of the Balagarian artist Josep Mateu Profitós.

The piece was commissioned by the Councillorship of Culture of the City Hall of Balaguer in 1999, and aimed to give more representativeness and visibility to the Eixample district, which expanded into this area of ​​the city. This will and the motif for the unity of the language were the determining factors in the conception of this public sculpture.

Josep Mateu, an artist who has mainly understood his work through sculpture and engraving, proposed a piece made of iron fifteen meters high that was arranged in the space of an open fan. To achieve this, he devised two abstract geometric shapes that start from the base of the sculpture and form a third volume that corresponds to the central part of a fan. This approach is based on the multiplicity of readings that abstract geometric shapes can offer when it comes to representing a topic as complex as the unity of the language. However, the artist did not base his work on any symbolic conception of the elements, but rather on a versatile and universal representation of a concrete reality. Thus, formally, Catalan, Valencian and Balearic are transformed into a triad resolved as a unit.

However, the only symbolic element that the work contains is colour. The artist suggests to the spectator relational readings with a tonality traditionally associated with passion; and more concretely, to one of the multiple passions: the bond of the individual with the own culture and with its manifestations.

Returning to the formal aspect of the sculpture, the visualization of the composition is foreseen in constant change: the angle of vision of the spectator will determine in each image the perception of the work. This capacity offers the author the possibility of presenting the sculpture as a union of changing forms. On the other hand, the hollow spaces that are in between are also significant for Mateu, since they confer a transit dimension in the work.

Finally, a verse by the historian, poet and essayist Joan Fuster was inscribed on the base of the work: «El català és això que parlem a Maó, a la Barceloneta, a Balaguer, a Elx, a Andorra, a Tarragona, a Felanitx, a Perpinyà…» [« Catalan is what we speak in Mahón, Barceloneta, Balaguer, Elche, Andorra, Tarragona, Felanix, Perpignan... »] This short text becomes a reference to understand the idea of ​​language versatility and the Catalan culture that the artist proposes with his sculpture. With regard to the realization of the piece, the monumental quality should have evidenced that the artist had to work previously with sketches, photomontages and models. Josep Mateu made several previous constructions that unified the elements he considered essential for the work: the union of two abstract geometric shapes and the resolution of these in a third final volume. These early models were made of simple materials, such as sheets of wood or cardboard. Later, the artist conceived more advanced models, with more detail as regards form and materiality.

However, initially he had raised the possibility of making the sculpture with solid sheets and leaving it unpainted to obtain the colour of the oxide. In this way, the iron would have given its tone to the effects of weather conditions and the passage of time.

The finished piece, with dimensions of 15 x 6 x 4 meters, was built by the company Cemesa de Soses from empty iron sheets and fixed from the inside. Finally, the assembly was carried out in the same location of the piece, which was inaugurated on September 11, 1999.

Josep Mateu Profitós, born in Balaguer in 1955, has a degree in Contemporary History (1979) and in Fine Arts (1992), both from the University of Barcelona. Currently, he works as a professor in Tàrrega.

Since 1992, he has made different exhibitions, both individual and collective in different spaces, galleries, museums and cultural centres, both nationally and internationally. Along with Balaguer, Josep Mateu has public sculptures in towns such as Pont de Suert or Cubelles. Also in Balaguer, we must highlight his collaboration with the Grup d’Art4, a collective for the dissemination of artistic activity, created in 1997.

In the international arena, stands out his participation in 2005 in a collective sample of engraving in the National Museum of Engraving of Buenos Aires, entitled Wood of an artist; and at the Index fair in Dubai, through the Artágora gallery in Seville, in 2007.