HISN BALAGI - BALAGUER: FROM THE MADINA TO THE CITY

HISN BALAGI - BALAGUER: FROM THE MADINA TO THE CITY

La Noguera Museum is currently one of the reference museums in Catalonia to understand the footprint of Islam and the society that came from the three cultures that lived in Al-Andalus of the medieval era: Muslims, Christians and Jews.

Under the title of “Hisn Balagi-Balaguer: from the madina to the city”, the archaeological remains of madina Balaguer allow us to go into the territory and the political and cultural context that determined our history a thousand years ago.

Al-Andalus and the county of Urgell

Under the title “Al-Andalus and the county of Urgell” it explains the territorial and political framework of what was the Upper March of Al-Andalus and the Catalan counties, paying special attention to the social and ideological component of the three cultures who lived together in Al-Andalus: Muslims, Christians and Jews.

From the exhibited archaeological remains, we can understand something about the material culture of the Andalusian world and the feudal world, represented by the county of Urgell.

Among the exhibited materials, it is remarkable the Visigothic archaeological site of the village of El Bovalar (Seròs, Segrià), possibly the most important set from beginning of the 8th century in Catalonia; we find in it a wide representation of ceramics, country tools, buckles and belt plates..., a cup of glass and a set of coins. The area also exposes the feudal conquest and presents the paintings and sculptures that have come to us from the Counts of Urgell, such as the sarcophagus of the children of Alfons el Benigne and Teresa d’Entença, the master Aloi de Montbrai. 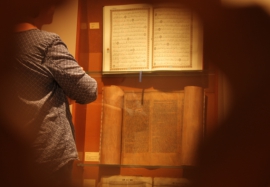 Start of the exhibition 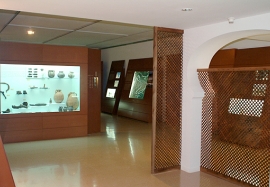 Al-Andalus and the county of Urgell

The archaeological remains of El Pla d’Almatà are the basis for explaining Madina Balaguer, the Andalusian city of Balaguer. The city of Balaguer has its origin in a military camp created during the 8th century to control the Segre River. Since the 10th century, some written sources speak of madina Balaguer: a city with cemeteries, residential areas, mosques, baths, alhóndigas, industrial zones, souks, a fortress and a suda—the residence of the governor—, and a wide area for farming and cattle raising. At this time, the gold of the Segre River was intensively exploited.

Madina Balaguer became a prosperous city where Muslims, Christians and Jews lived together. The archaeological remains of the Pla d’Almatà and the city of Balaguer provide much information about the customs and the everyday life of these communities. Currently, the archaeological site of El Pla d’Almatà is the most important Andalusian site in Catalonia and one of the reference points in the peninsula. The exhibited archaeological objects are one of the most unique sets of Andalusian culture from the 8th to the 12th centuries. 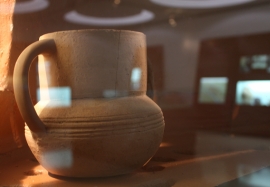 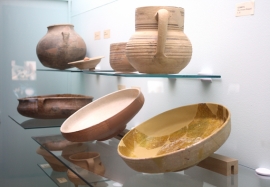 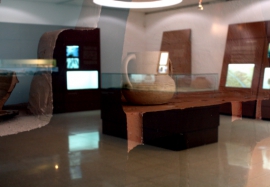 Hisn Balagi presents the castle as the centre of power, both in Andalusian times and in the Counts. From the Andalusian moment, it is worth mentioning the plasterwork that decorated the taifa palace (built in the middle of the 11th century), this plasterwork represents one of the few ensembles of Islamic architecture of this time in the Iberian Peninsula comparable to the remains of the Aljaferia of Zaragoza or the Alcazaba de Málaga: vegetal, zoomorphic and epigraphic elements are intertwined in a network of polylobulated arches that keep remains of original paintings based on Afghanistan’s lapis-lattice or cinnabar red, among others.

After the feudal conquest of the city, the palace became the residence of the counts of Urgell. The mid-14th century reforms made by the counts in the palace are remarkable, and some architectural decoration elements still survive, we keep also the remains of common and luxurious tableware (ceramics of metallic reflexes form Manises) and the water pipes of the palace gardens made using tiled and blue tiles from Manises-Paterna. 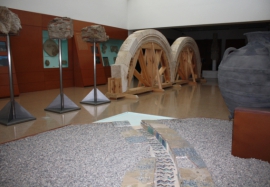 The Count of Urgell conquered the Andalusian city in 1105 and this meant the ruin of the urban nucleus and the emigration of the Andalusian population. The city did not recover until the beginning of the 14th century, when the House of Barcelona entered into the county of Urgell and gave a great impulse to a series of public works such as the church of Santa Maria, the bridge and the portal of Sant Miquel, the monastery of Saint Domènec ... these works embellished the city and shaped the general lines of the current city.

A second fact had a major impact on the urban organization: the sentence of Alfons el Benigne (the Kind), according to which the Jews had to live together but outside the walled enclosure; this meant the creation of a Jewish quarter, which was built in an area in the south of the Mercadal; this area was included in a new walled area.

The conquest of Balaguer by King Ferdinand of Antequera and the disappearance of the county of Urgell led the city become part of the Crown of Aragon and the transition to the modern age began. 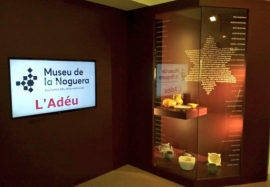 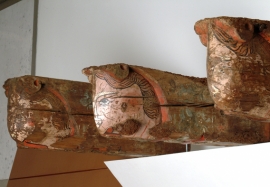