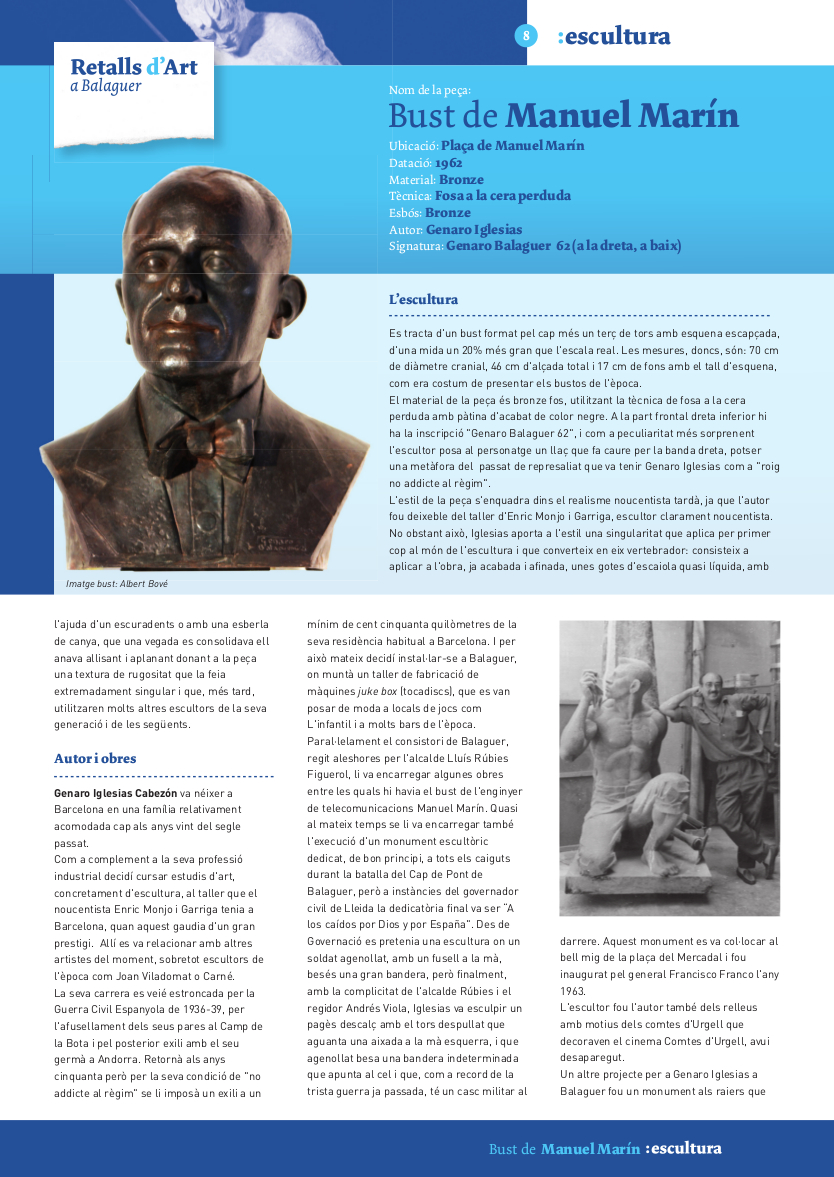 Manuel Marín Bonell (Morella, 1892 – Madrid, 1973) was the telecommunications engineer who directed the installation in Plaza del Mercadal de Balaguer of the first automatic telephone exchange in Spain in 1923, the year in which the *Mancomunitat de Catalunya decided to automate the telephone service and commissioned Manuel Marín to study the main systems manufactured in Europe. During his stay in the city he lived in the hostelry of Santo Cristo, and in his spare time he built what was probably the first radio receiver in Spain, with which he got to listen to the programs of the English radio stations. This innovation created a great social expectation and caused a large number of visits to the sanctuary.

In 1924 Marín came to occupy the direction of the provincial telephone networks integrated into the Mancomunitat de Catalunya. Contracted by the monopoly National Telephone Company of Spain (which on November 5, 1925 absorbed the network of telephones of the Mancomunitat), led the implementation of interurban automatic telephony to the main state capitals, the installation of the first answering machines and of the automatic information system of changed numbers.

He wrote and published a series of manuals for the conservation and engineering of switching equipment, some of them translated into English, such as the conservation method for power plants.

The telephone network of the Mancomunitat de Catalunya

At the beginning of the 20th century Spanish legislation had left the development of telephony services in the hands of private initiative. This caused the neglect of all those areas in which the cost of construction and maintenance of the lines prevented the rapid collection of benefits. In view of this fact, the Mancomunitat of Catalonia set itself the objective of creating a telephone network that reached all the towns and united them in the general networks existing in Spain. To achieve this, an agreement was signed with the Peninsular Telephone Company, representing the interurban networks in Catalonia, and a concession was requested from the State, which was signed on September 9, 1915, and the Mancomunitat Telephone Section was created, under the direction of Esteve Terradas. In September 1916, Manuel Marín was added to this section, who was appointed head of Exploitation of the Telephone Service of Lleida. The Balaguer telephone exchange was of the Strowger type and the Siemens & Halske system in Berlin, switch-type switchgear, and it started operating on December 15, 1923. It had a capacity of 100 to 1,000 subscribers and its initial capacity was two hundred subscribers, which could easily be expanded to a thousand. It was the only one of this system installed in the State.

In 1956, a new building was built to renovate the telephone exchange, in the place where the old hospital and church of San Juan, on Barrinou Street, had been located. A space was released before the plant in which a square was located that is dedicated to the engineer Manuel Marín, who attended the inauguration. The official act was chaired by the President of the Republic of Costa Rica, Josep Figueres. In 1962 he installed the bust that Genaro Iglesias sculpted with the figure of the engineer.