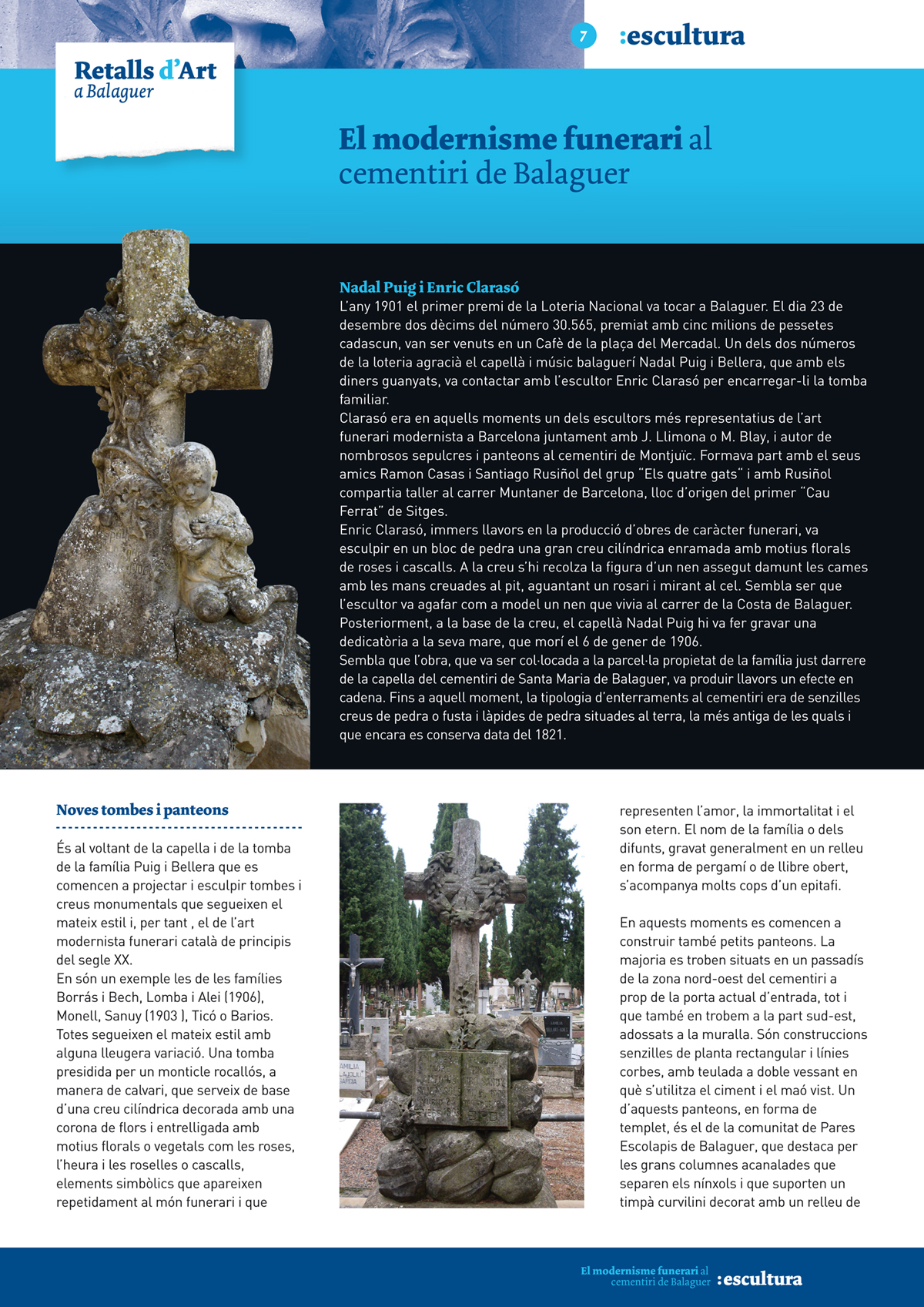 In 1901 the first prize of the National Lottery was won in Balaguer. On December 23, two tenths of the lottery ticket number 30.565, awarded with five million pesetas each, were sold in a café in the Plaza del Mercadal. One of the two lottery tickets was won by the priest and Balagarian musician Nadal Puig i Bellera, who contacted the sculptor Enric Clarasó to entrust him, with the money earned, the family tomb.

Clarasó was at that time one of the most representative sculptors of modernist funerary art in Barcelona together with J. Llimona or M. Blay, and author of numerous tombs and mausoleums in the cemetery of Montjuïc. He was part, along with his friends Ramon Casas and Santiago Rusiñol, of the group “Els quatre gats” and with Rusiñol he shared a workshop on Muntaner Street in Barcelona, ​​place of origin of the first “Cau Ferrat” in Sitges.

Enric Clarasó, immersed then in the production of works of funerary character, sculpted in a block of stone a large cylindrical cross entwined with floral motifs of roses and poppies. On the cross the figure of a child is supported, who sits on his legs and with his hands crossed on his chest, holding a rosary and looking at the sky. It seems that the sculptor took as a model a child who lived on the Costa de Balaguer Street. Later, at the base of the cross, the priest Nadal Puig had engraved a dedication to his mother, who died on January 6, 1906.

It seems that the work, which was placed on the plot owned by the family just behind the chapel of the Santa Maria de Balaguer cemetery, produced a chain effect. Until that moment, the typology of the graves of the cemetery was simple crosses of stone or wood and stone tombstones located on the ground, the oldest of which, still preserved, dates from 1821.

Around the chapel and the tomb of the Puig y Bellera family, monumental tombs and crosses began to be designed and sculpted following the same style, therefore, that of the Catalan modernist funerary art of the early 20th century.

Examples of this are those of the families Borrás y Bech, Lomba y Alei (1906), Monell, Sanuy (1903), Ticó or Barios. They all follow the same style with some slight variation. A tomb presided by a rocky mound, like a calvary, which serves as the basis for a cylindrical cross decorated with a wreath of flowers and entwined with floral or plant motifs such as roses, ivy and poppies, symbolic elements that appear repeatedly in the funerary world and which represent love, immortality and eternal sleep. The name of the family or the deceased, usually engraved in a relief in the form of parchment or of an open book, is often accompanied by an epitaph.

Nowadays, they have also begun to build small mausoleums. Most of them are located in a passageway of the northwest area of ​​the cemetery near the current entrance door, although we can also find them in the southeast part, attached to the wall. These are simple constructions of rectangular base and curved lines, with a double-slope roof, in which cement and exposed brick are used. One of these mausoleums, in the form of a temple, belongs to the community of Piarist Fathers of Balaguer, which stands out for its large columns. The mausoleum is crowned by a trefoil stone cross on the top.

In the same corridor but in the southwest area, the mausoleum-chapel of the Benseny family (1907) rises. It has a square base with a gabled roof of glazed tiles and exposed brick walls, typical elements of modernist architecture. The mausoleum is organized from a small central chapel surrounded by six niches arranged vertically on the sides. It is accessed through a semicircular arch door protected by a wrought iron fence that gives way to the interior of the mausoleum with a mosaic pavement with geometric shapes and walls decorated with paintings after its construction.

Around this mausoleum-chapel we find another typology of funerary monuments very characteristic of this moment. They are tombs of rectangular or square base within a plot delimited by a stone plinth and a forge fence decorated with floral and vegetable motifs very elaborated. The interior, either brick or paved, is formed by a pedestal finished in a cross or by a star and, in front, a tombstone or slab that covers the access to the crypt.

This is the case of the tombs of the families Lluch (1906), Valls (1910) or Fontdevila where symbolic and representative elements of the funerary world also appear, such as the heads of winged angels, climbing ivies, flaming cauldrons, funeral wreaths, bay leaves and, together in the same relay, the anchor, the cross and the heart symbolizing Hope, Faith and Charity.

We also find motifs and sculptures made in workshops specialized in seriation for cemeteries, as is the case of the figure of the child angel, bearer of the trumpet of the Last Judgment, which crowns the tomb of the Daviu family, located before the chapel of the cemetery. This same angel is found identical in the cemetery of Lloret de Mar, at the hypogeum of Narciso Zaragoza (1906), the work of the architect Vicenç Artigas i Albertí.

This funerary modernism will not come alone but will be accompanied by the construction of single-family homes belonging to families of the bourgeoisie of Balaguer who choose the new architectural trends to build their houses. This is the case of Xalet Montiu, located on the street of Àngel Guimerà and the greatest exponent of Modernism in the city. The exact date of construction and the architect who projected it are unknown, but we know that it was commissioned by lawyer Lluis Montiu, who according to some oral sources was the winner of the other lottery ticket.