Maces of the City Hall 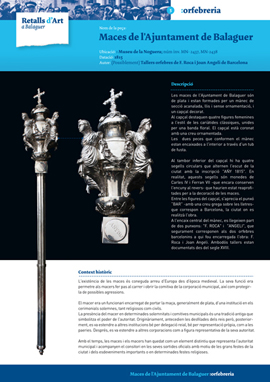 The maces of the City Hall of Balaguer are made of silver and are formed by a handle with a ribbed section, smooth and ornamented, and a decorated head.

In the head stand four female figures in the style of classic caryatids, joined for a floral band. The head is crowned with an ornate cross.

The two pieces that make up the handle are fitted inside through a wooden tube.

In the lower tambour of the head there are four circular stamps that alternate the shield of the city with the inscription “YY 1815”. Actually, these stamps are coins of Charles IV and Ferdinand VII –they still keep their stamp on the back– that would have been reused for the decoration of the maces.

Between the figures of the head, the engraving “BAR” can be seen –with a Greek cross on the letters– that corresponds to Barcelona, ​​the city where the work was made.

In the central fitting of the handle, part of two engravings are read: “F. ROCA” and “ANGELI”, which surely correspond to the two goldsmiths from Barcelona to whom the work was commissioned: F. Roca and Joan Angeli. The two workshops are documented since the 18th century.

The existence of maces is known throughout Europe since medieval times. Their function was to allow the macebearer to make way along the street for the procession of the municipal corporation, as well as to protect it from possible aggressions.

The macebearer was an official in charge of carrying the mace, usually silver, of an institution in solemn ceremonies, both religious and civil.

The presence of the macebearer in certain solemnities and municipal procession is an ancient tradition that symbolizes the power of authority. Originally, they preceded the parades of the kings, but, later, their presence was extended to other institutions either by royal delegation, or by their own representation, as in the paeries. Later, it was extended to other corporations as a representative figure of authority.

With time, the maces and macebearers have remained as a distinctive element that represents the municipal authority and they accompany the consistory in their official outings on the occasion of the great festivals of the city and important events or in certain religious festivals.

In Catalonia we find them linked to the paeries: Montblanc, Cervera, Lleida...

The maces of the City Hall of Balaguer date from the beginning of the 19th century.

In 1934, the City Hall decided to take out the ornamental crosses that reach the head of the maces, for religious reasons. Once the Civil War ended, the crosses were again placed in the heads and left as they are until today.

Currently, the maces accompany the municipal procession to the Mass of Saint Christ on November 9. During the rest of the year, the maces and the clothes of the macebearers are kept in the Museum of La Noguera.

Generally, the macebearer’s uniform is composed of a tabard, very similar to a dalmatic, which is usually embroidered with the arms of the institution to which it belongs, velvet cap with feather and silver mace.

The clothes of Balaguer’s macebearers have been changed twice. In 1908, the City Hall agreed to change them when they were already, according to the minutes of April 30, 1908, ridiculous, and it was decided to replace them with an American navy blue suit with a gold stripe on the pants and cuffs of the sleeves and a cap with the embroidered city coat of arms. In addition, the initials of the position they held were put on the uniform.

Later, in 1944, these clothes were considered obsolete and it was decided to make new period costumes with hand-embroidered ornaments, which are the ones that are currently preserved.

Another symbolic element: the traps

The traps were two kettledrums that, placed on top of a horse, were played by a man dressed in the style of the 15th century, usually in the procession of Corpus.

In Balaguer, this tradition began in 1846, when the traps were inaugurated, which became one of the traditions most followed by the Balagarians. Children and adults follow with admiration the sound of the traps during the whole procession of Corpus.

Two people dressed in a red suit to their feet with a white jacket, held a large metal drum and walked slowly. Behind them, another character carried a mace in each hand and dropped it from time to time on the metal drum, first with one hand and then with both: he did it rhythmically and without stopping while the procession lasted.

The traps stopped coming out at the beginning of the 20th century, although they were recovered for the Corpus procession of year 1930.

From the 40s, the traps also came out during the Fiesta Major of Santo Cristo and were carried on a horse. The knight, who was accompanied by a page leading the horse, made them sound from street to street, stopping in the squares to announce the Fiesta Mayor.

Currently, the tradition of traps has disappeared.