Mural of the counts of Urgell 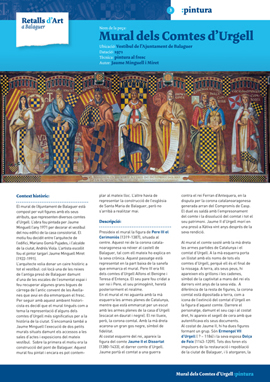 Name of the piece: MURAL OF THE COUNTS OF URGELL
Location: Vestibule of the City Hall of Balaguer
Dating: 1971
Technique: fresco painting
Author: Jaume Minguell i Miret

The mural of the City Hall of Balaguer is composed of eight figures with their attributes, representing various counts of Urgell. The work was painted by Jaume Minguell in 1971 to decorate the lobby of the new building of the city hall. The motif was decided between the architect of the building, Mariano Gomà Pujades, and the mayor of the city, Andrés Viola. The artist chosen was the painter, from Tarrega, Jaume Minguell Miret (1922-1991).

The architect wanted to give the whole lobby a historical look: he placed one of the bars of the old prison of Balaguer on one of the stairs of the aforementioned space and had some large load-bearing beams recovered from the old Convent of the Avellanes that currently frame the fresco. To continue with this historicist environment, it was decided that the mural would have as its theme the representation of some of the most significant counts of Urgell for the history of the city.

Jaume Minguell was also entrusted with the execution of two small murals located above the entrances to the halls of events and exhibitions in the lobby itself. On the first mural, the motif was the construction of the Balaguer Bridge. This mural was painted and can be seen in the same place. The other mural aimed to represent the construction of the church of Santa Maria de Balaguer, but it never came to fruition.

Presiding over the mural is the figure of Peter IV of Aragon (1319-1387), located in the centre. This king of the crown of Aragon was born in the castle of Balaguer, as he himself explains in his chronicle. This passage is represented in the lower part of the border that frames the mural. Peter IV was the son of the counts of Urgell Alfonso the Kind and Teresa of Entenza. His father was called to be king and Peter, his firstborn, inherited the kingdom.

In the mural the king holds with his left hand the full arms of Catalonia, while it is framed by a shield with the full arms of Urgell (checkered in gold). The king, however, wears the crown of the county. With his right hand he caresses a big black dog, symbol of fidelity.

To the left of the king, appears the figure of Count James II the Unfortunate (1380-1433), the last count of Urgell. James led the county to a war against King Ferdinand I of Aragon, in the dispute over the Catalan-Aragonese crown generated by the Commitment of Caspe. The duel ended with the imprisonment of the count and the dissolution of the county and all its patrimony. James II of Urgell died in a prison in Játiva twenty years after his surrender.

In the mural, the count holds with his right hand the arms of Catalonia and the county of Urgell. In his left hand he carries a list with the names of all the counts of Urgell, because he is the last of the lineage. On the ground, at his feet, appear the shackles and chains, a symbol of captivity at the hands of the king during the last twenty years of his life. Unlike the other figures, the crown of the county lies on the floor, as an icon of the extinction of the county of Urgell in the figure of this count. Behind the character, above his head and on the right side, appears the wax seal with which he authenticated his documents.

To the left of the couple is represented the figure of Countess Consort Cecília de Comenges (? -1384), wife of Count James I, thus, sister-in-law of King Peter IV of Aragon, the Ceremonious. The two spouses began a series of foundations and buildings, among which we can highlight the parish church of Santa Maria de Balaguer, which the widow countess initiated and which, in our mural, she holds with her right hand. With her left hand she holds the mantle itself, which in its lower part carries a border with the arms of Comenges (a cross patty). The dress of the lady also carries a low border with the squares of Urgell. Behind the figure, in the high part, to the right, the same shield of the house of Comenges appears and in the left part, the full arms of the condal house of Urgell.

To the right of King Peter IV of Aragon, already in the other half of the fresco, is the figure of Count Ermengol VI (1097-1154), in the name of whom Balaguer was conquered from the Andalusians at the beginning of the 12th century, since he was underage. Count Ermengol VI spent most of his childhood in Castile, in the lands of his maternal grandparents, but returned to his territories to participate in the conquest of the city of Lleida and also in those of Fraga and Mequinenza. In our name he dresses like a warrior, with breeches and coat of mail, perpunte, mantle and helmet. He wears the crown of the county and holds the shield with Urgell’s full arms, which also appear in the perpunte. Behind him, two shields of difficult identification are represented, but the fleur-de-lis can indicate the existing connection with the cities of Lleida and Fraga, which the count collaborated to conquer.

To the right of this count we find the figure of Pedro Ansúrez (? - 1117), Lord of Valladolid, the de facto conqueror of the city of Balaguer from the Andalusians in 1105 in the name of his grandson Ermengol VI. It is the only figure that carries a sword, which is held behind the shield with the full arms of Urgell. The count of Valladolid is also dressed as a warrior, like his grandson, with breeches and coat of mail, a mantle that covers his body and helmet. The imperial crown girds his head. At his feet develops a schematization of the city of Valladolid, of which he was direct lord. To the left of his head are the arms of Urgell, and to the right a combination of letters from the Greek alphabet and the Latin omega-tau-jota, of dubious significance so far.

On the far right of the mural is depicted the only woman in the history of the county who legitimately and directly held the title of Countess of Urgell: Aurembiaix (1196-1231). The lineage of Wilfred the Hairy would end in the condal house of Urgell with the daughter of Ermengol VIII and Elvira Núñez de Lara. This lady had an unhappy life, separated from the county by her uncle, the viscount of Àger, Guerau Ponç de Cabrera, who usurped lands and castles. The countess put herself under the protection of King James I, to whom she donated the county in exchange for help to recover it. The tradition says that there was a pact of concubinage between the two, although recent historiography denies it. Aurembiaix died countess, at the age of 32 years, in the castle of Balaguer and without offspring. The county then passed definitely into the hands of the Cabrera family.

The countess holds a small shield with the full arms of Urgell, a motif that also appears on the borders that decorate the sleeves of the dress. Next to the head, this lady’s coin is represented, with Urgell’s arms surrounded by boilers, which were the symbol of the Lara family, to which her mother Elvira Núñez de Lara belonged. We also find a boiler decorated with Urgell’s squares at the feet of the countess, as a basket where some herbs have been deposited. Another significant element in this figure is the shield with the full arms of the Catalan-Aragonese crown behind the head of the countess. We must remember that it was during her mandate that she gave the county to the crown, and the counts of Urgell owned it from then on only in fief.